The truth about skidding, Don't call people a skid for skidding.

Here's something I pulled from my own thread reply.

See here's the thing about skidding.

It's not skidding, it's open source documentation.

If someone posts Open Source Software or An open source exploit, then people are allowed to study your code. That's kind of why Open source exists. People use Open Source Documentation to Study other people's code and learn stuff from it. Skidding isn't bad, as long as you leave Credit. (If you take their code you leave credit, but if you study their code that's different).

Now, cracking someone's source if it is PROTECTED is different. Skidding of a Cracked source or a Protected source is not good.

And if it IS a thing, then it's not really that bad.

When I first started Coding, I used to skid. Back in 2018 when I started becoming a dev, I skidded stuff. That was how I learned the basics. I would study other peoples codes and sources, and if I ever took their code I would leave credit.

So Don't get mad at someone for Skidding. Don't call people Noob or Bad or a skid for "Skidding". Open Source Documentation is helping people learn to code.

I agree with this entirely, great thread to inform people that go around calling newer people skids all the time.

@Potatox FINALLY someone GETS it. Thank you.

You shouldn't really thank me for that. I've had a mindset of we learn from others work for quite a while, people tend to learn new words when reading, I think of coding/scripting the same way, you read someone's piece of work (relate this to a book) and you learn new things and how to improve a specific part.

i think you need to give credits to my friend 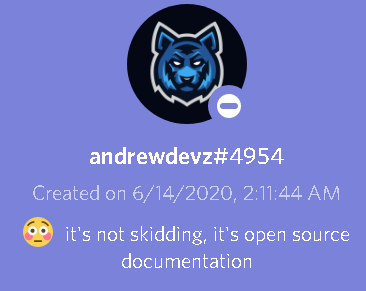 @EarthBoy55 That's where I got the whole skidding doesn't exist thing. He's my friend too.

Someone actually call themselves a "Developer" / "Software engineer" even though they have no idea wtf is jagged arrays :bruh: plus not to mention they didn't put credits in "their" products

A machine that turns coffee into code.

If your saying skidding doesnt exist that means stealing someones work without credit doesnt exist? The main point of this thread doesnt make sense to me.

@Zander7473 The point I am trying to get across is that Studying sources and Using Open Source Documentation to learn to code isn't bad, and skidding isn't bad unless you don't give credit to other people. I myself do not skid, but just don't call other people a skid for skidding okr using Open Source.

@EarthBoy55 I feel like you are the alt of someone.

Also, classiccat meant it as a joke, when Hectique was serious.

Just searched it up on google and this is what i call multidimensional arrays (synonym for jagged arrays).

So nvm i do know what jagged arrays are.

Making key systems for many exploits like Drop, Zoid, Coco Z and Alantic. DM me for one.

Btw i use arch.

@EarthBoy55 There are stuff called proxies and VPNs.

Making key systems for many exploits like Drop, Zoid, Coco Z and Alantic. DM me for one.

Btw i use arch.